An abstract and a nature's poet, I share my poetry on this blog, Rain-Chimes

She sits forlorn,
wrinkled and wizened
on frostbitten grayish clouds
under the veil of mist,
determined to keep vigil
in December chill
warmed by distant embers
of shining galaxies.

She drinks from
that half- filled cup of coffee
left lukewarm on
the window sill,
breathing in the lingering scent
of roasted peanuts
and the luscious chocolate cake
you’d gobbled away
in gluttonous delight.

She is like honeydew,
or a tangy round slice of lemon
her breath scented in
scent of myrtle and pine needles,
she resembles to
to a shivering hungry beggar
a round golden bun,
to a crying child she appears
to be his favorite crunchy cookie.

She hums x-mas hymns
in the silence of falling snowflakes,
whispering fables from
dogeared volumes of Aesop
befriending insomniac asters
chilled by the winter frost,
her smile is reminiscent
of daffodils from bowers of March,
she scribbles her dreams
writing epistles in the fragrance
of blooming night jasmine.

amethyst skies
at crepuscular hour
are reflected on sapphire waters,
as epistles of poetic calligraphy
resonating with versatile hues,

when the topaz sun
is gobbled as mandarin morsel
and periwinkle heights
pantomime a giant chrysoberyl,
of oxymoron shades
soon blending into
an obsidian night.

the opal moon
ailing with insomnia pours over
ivory, printed volumes,
in long hours of silent onyx night,
and the diamond stars
effulgent above peer at the lovers
painting rainbow dreams
within molasses of eyelashes.

budding chartreuse whispers
kiss fringes of
a blossoming tourmaline dawn,
the sky like an armful of scented orchids
with a silver lunar sliver
on the distant aquamarine,
like a half forgotten love song
lingering on edge of reverie.

Summer is a juvenile boy,
hopscotching with pebbles
on afternoons strewn in
quixotic cricket’s rhapsodies,
and butterflies fluttering
salsa delights,

He scatters and gathers
moments like sparkling marbles,
winking in honeyed sunshine~
wearing a hat pinned in sunflowers
he guffaws his laughter
to flower into mustard blossoms.

playing peek-a-boo
with chameleon silhouettes,
he scribbles his secrets on clouds,
with the moon his ball
he aims to taint the night
in mud-stained shots…

night dissolves
in its own pessimism,
leaving the moon forlorn
to blend in tequila sunshine
like ice-cream scoop
on mango jelly,
and orphaned stars
are adopted by benevolent bay
abounding in constellations.

whispers
of snow peppered
on wizened brow of winter,
echo in eerie night
moon shivers
and wraps itself
in warmth of muffler clouds
and stars hide
beneath the quilt of mist.

purple orchids
are syllables of evensongs,
reverberating
their exuberance under
the golden glow of sunbeams. 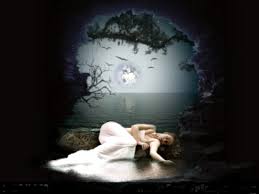 a runaway moon seeks
to flee from its haunting eclipse,
she is inflicted by curse
of a waxing and waning persona,
always melting into vacuous nothingness
of espresso spilled skies
and freezing into sublime orb
oft stolen by silent bays~
in snippets of crumpled reflections
from a lenient nocturne.

lit in benevolence of sun
moon rues its loneliness on heavens
where stars never befriend her,
preening in her tarnished halo
she tries to erase her boredom
filling empty, elastic moments in
glimpses of lecherous voyeurism
trespassing within walls of privacy,
or just getting drunk on wine
in morose moments of solitude,
seeking oblivion to wipe away
lurking shadows of the forlorn.

she is like a fairytale princess
enshackled in nascent rain-songs of tempest,
fated to be forever emblazoned
on cosmic vacuum as a reluctant sigh,
she can escape momentarily
on gossamer wings of imagination
behind facades of vague,cloudy oblivion
or play truant to sleep over
shimmering hopes of indigo lakes,melts
she reclines over denuded boughs of fall
her face tinted in twilight hues,
and blends into opacities
of the treacherous winter mists.

she gilds nature’s realms in silver
these ornaments like butterfly flutter poetry,
she is the echo of radiance
from sun buried within womb of hurling oceans,
a reminder of the sunrise awaiting
beyond dark thresholds of ughten,
she is an eternal dream
finding diverse interpretations,
to the hungry, beggar gazing at night sky
she is a rounded bun or a milk bowl,
the poet lost in metaphors
sees a mirror in the moon which
revives dwindling meters of his verse,
while to a lover she is epitome
of the glowing visage of his beloved.

salting sleeping earth contours
in fragile embryos of dreams,
she etches smiles over blooming harsingars,
blessing sleeping sunflowers
with hopes of fluid graffiti dawns,
she is the whisper of long faded sunsets
reiterated by the night’s chasm,
owl’s hoots and eerie calls of night jars
are scribbled as faint wrinkles
on the face of forlorn moon,
perched over velvet softness of night
she dwells of longevities exhaled
as an old woman reflecting on past years…

like amber droplet
of honey on bosom of
celestial infinity,
glistening like aureate orb
in ebony vacuum.

tainted as tangerine
visage of autumn,
by fingers of earth shielding
cascading sublime gold
from the chalice of Sol.

lingering fragment of
watery smile of Hespera
from the molten twilight’s aisle
stolen by palms of creeping
shadows of sombre night.

a round topaz
aglow on heavenly heights,
its inherent platinum sheen
erased by umbra of Gaia,
while sun fails to
donate its dower of light,
in this chilly solstice
of elastic darkness…

with paint brush of
imagination,
dipped in palette of
molten rainbows,
aisles are adorned in
stolen moments of life,
of evanesced memories
or epitomes of fantasy.

when asters born
of elixir droplets sprinkled
over the sable infinite,
from bosom of Hera
collide on cosmic sojourns,
comets are born,
etching shimmering paths
by jazzing on stardust feet.

insomniac stars sit
over sailing settees of clouds
sipping fuming espressos
in fragilities of porcelain
gossiping about trifles on
their nocturnal vigil.

comets volley over
fluidities of gaping silences,
a loner moon indulges
in introspections as it sprinkles
vermouth on surreal slumbers,
while planets orbiting
on premeditated paths spin
dreams with stardust sparkles.

the garrulous stars are
in conference scheduled till ughten,
when preparations begin
for the arrival of sun’s chariot,
they talk about moody moon
its waxing and waning temperament
and changing character
with seasonal metamorphosis,

they discuss intuition of shooting stars
their predilection for prophesies,
and predicting future’s uncertainties
at times wishing upon them
for a cloudy night of relaxation,
stars talk about planetary motion
and its influence on human existence
how their gait can alter
the stride of whimsical time.

sipping espressos to ward
off both chill and allure of sleep,
they chat about confused moths
who orbit streetlights
while lovelorn for distant moon,
and about oysters seeded
by moonlight in opalescence,
grumbling at the cheat fireflies
who try to imitate starry radiance.

moon is a pallid sigh
lingering on
edges of cosmic quietude,
as a leftover crumb
from lunch table
of daylight’s chaos.

a lonely maple
reaches high on tiptoe,
to try to pluck
harvest moon from
unfathomable depths of nights,
with leafless fingers
like prongs of a giant fork,
grasping at opportunities
as shooting stars.

moths flutter
their inadequacies
under a delinquent streetlight,
craving all the while
for elusive moon perched
high on a stagnant indigo moment,
cynical smile ridiculing
the moth’s illusions.

moon is a pearl
in indigo palm of cosmos,
shimmering with asters
pouring vanilla ice-cream
in dollops into
voracious lips of Gaea.

the celestial pomegranate
is pealed by divinity to sprinkle
seeds on night’s veil of sombre
as twinkling asters- the
frozen fireflies on Kohl-ed skies,
or hopes aglow in despair.

raindrops fall
to pepper the taffeta
of frangipani breathing
sweet perfume,
and scroll an arch
of prismatic rainbow
on the grey expanse.

quietude of
an uninhabited island
is ripped into shards by
claws of fierce storm
its carnivorous fangs piercing
flesh of clouds to
create thunder and lightening. 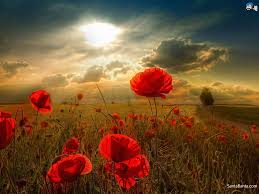 hypnotic sighs
of poppies in vermilion
lull the senses into a slumber,
gifting stolen moments
of respite in anxiety.

these glimpses are
portrayed on sands of time
as beautiful images,
like vows of true love,

and are admired with pleasure
by soul, caressed by
breeze of bliss
and treasured as flowers
in memory’s vase,
or bottled away as fireflies
of glowing starlight…